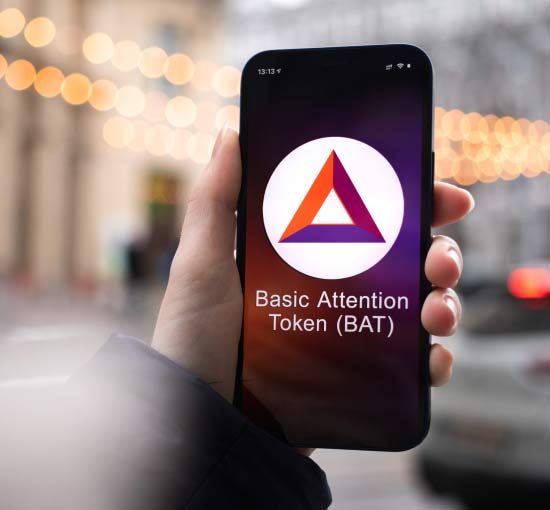 Basic Attention Token (BAT) is an Ethereum-based token whose main goal is to eliminate the economic and social costs of digital advertising, while also creating an efficient, fair, and decentralized blockchain-based digital advertising market that can meet the needs of all its participants.

Basic Attention Token (BAT) was launched specifically for the rewards mechanism and increasing the effectiveness of ads in the Brave free web browser. BAT’s creator is Brendan Eich, a programmer and JavaScript developer. His previous feats include the foundation of Mozilla Corporation. In May 2017, he launched an ICO for his new project, Basic Attention Token. The ICO was successful and took only half a minute, which caused a flurry of criticism from competitors.

Nevertheless, Eich’s new project remains interesting for investors from all over the world because it promises to solve fundamental problems of the digital advertising market. For instance, with each passing year, an ever-increasing number of people are becoming more and more concerned about how the personal information they enter on social networks and various websites is used. There is also a noticeable increase in demand for software that allows you to block ads on the Internet. More than 600 million smartphones and computers around the world already employ such software. This topic is relevant to all people, not only to professionals working in the field of digital advertising; that means that the project has every chance of success and can attract even more attention from investors around the world.

Application of BAT in digital advertising

The digital advertising industry is finding it increasingly challenging to regulate the relationships between advertisers, publishers, and end-users. The personal data of its users are being repeatedly leaked online, resold, or used by companies for profit. People develop a negative attitude toward advertising. A lot of resources and money are spent on analytics and consumer engagement reporting. The Basic Attention Token project has figured out how to solve this problem.

The users of the Brave web browser can hide pop-up ads. At the same time, they can view internal advertisements that advertisers publish directly through the browser and get rewarded for it in the form of BAT tokens. In this case, the users will be shown only relevant ads based on their interests — search queries and the pages they visited in this browser.

The BAT token circulation process inside the Brave browser

Thus, the decentralized Basic Attention Token platform is based on the company’s two main products: the BAT token, which is used for payments and rewards within the system, and the Brave web browser. The upsides of the Brave web browser are high privacy, the blocking of any attempts to track user data and behavior by other devices and systems, and the ability to generate a steady income within the platform.

BAT is usually traded in pair with Bitcoin: BAT/BTC. The coin appeared in 2017 and reached its maximum value by April 2021. At that time, it was trading for $1.65. At the time of writing, the value of BAT is $0.36. To trade BAT, you first need to register at a cryptocurrency exchange and convert your funds into Bitcoin. Afterward, you can trade the Bitcoin/BAT cryptocurrency pair. You may think it is complicated or confusing, but in fact, it is no more complicated than trading fiat currencies or stocks.

If you have traded before, you will be familiar with the process. If you are planning to trade cryptocurrencies for the first time, you then need to choose the most reliable cryptocurrency exchange. The advantage of such an exchange can be a personal analyst who will always be in touch in a private chat, helping you choose a successful strategy, as well as deal with transactions. A total of 1.5 billion coins have been issued. BAT cannot be mined, and there are no plans to issue additional coins. An exact number of coins helps control possible inflation, ultimately ensuring the stability of this cryptocurrency. You can thus acquire BAT by using, for example, a cryptocurrency exchange. This is a simple and reliable way to purchase any cryptocurrency, including those whose issue has already ended. For instance, you can trade Bitcoin for BAT on the Beaxy exchange: bat - btc .

The success of the Basic Attention Token cryptocurrency project is also confirmed by its current partners, including the popular British newspaper The Guardian and the American daily Washington Post, the Vimeo video hosting, the HTC smartphone developer, and others. All of this allows us to say that the Basic Attention Token project has every chance of success and explosive growth in the value of the BAT coin in the future, which attracts more and more experienced investors who diversify their portfolios with this token.

BAT is an ERC-20 token created on the Ethereum blockchain; like other similar coins, it is protected by the Proof-of-Work (POW) consensus algorithm. Last year, the coin transfer rate stood at 15 TPS (15 transactions per second), which is a pretty good figure for such cryptocurrencies.

You can most often exchange BAT with Bitcoin — on the Beaxy exchange, for instance: bat - btc . To exchange your funds for BAT, you will first need to exchange them for Bitcoin, as it is the most popular cryptocurrency involved in almost all cryptocurrency pairs. By virtue of the liquidity of the exchange and the token, all transactions take place in seconds, so exchanging Bitcoins and then BAT is no hassle even for a beginner. The additional materials and tools provided by Beaxy help you increase your profits in a minimum amount of time. If you are ready to start making money with digital currencies, join Beaxy and embark on this exciting journey with the support of professionals!