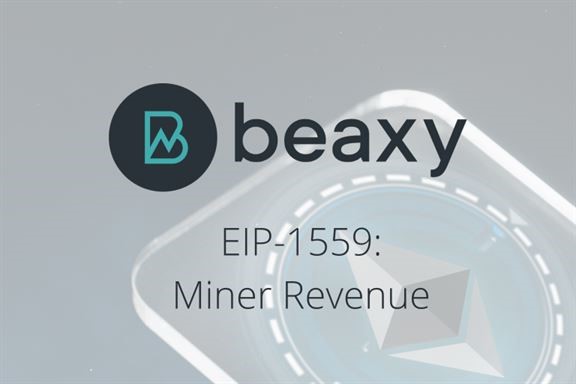 Ethereum, the world’s second-largest cryptocurrency next to bitcoin, made a major upgrade on Thursday, August 12. Days after it was activated, what has changed in regards to miner revenue? It was previously revealed that the upgrade, the Ethereum London Hard Fork, particularly its EIP-1559 would deliver a significant change to the income source of miners. With this transition, it was believed that miner’s income will be reduced relative to what they would have earned from the previous versions given the same input costs.

However, recent findings revealed that the EIP-1559 upgrade has not made any major impacts to ETH mining revenue. But, some notable changes were observed.

Ethereum users have struggled with high gas fees and slower transaction speeds as the network continues to grow. For one, users have had to deal with Ethereum’s long-standing issue with its capability to scale. In addition, there have been congestion problems in the network, which host different projects of the decentralized finance (DeFi) sector as well as non-fungible tokens (NFTs). Meanwhile, the majority were concerned with high transaction fees, which hinder further adoption by pricing out more potential users.

EIP-1559 was finally activated. It eliminates the first-price auction fee method in favor of a fixed-price sale. Now users will not have to estimate the required gas fees because of the openly stated ‘base fee’ in the next block that will be determined by the network. This will improve Ethereum’s fee’s, market efficiency, and predictability.

With this activation, the majority of the transaction fees previously given to miners are now burned so as not to be included in ether’s circulating supply. The burning mechanism destroys the Ether that will reduce the growth rate of its supply in the market. This will bring deflationary pressure in the cryptocurrency resulting in fees fluctuating according to the demand to use the network. The base fee will rise if the block is too congested and vice versa.

Since the update, the rate of ether burning is around 3.17 ETH per minute. As of writing, a total of 60,411 ETH which translates to an estimated 185 million dollars has been burned.

Even with the reduction to Ethereum transaction fees, no significant decline has been observed in the revenue earned by miners in the latest upgrade. Data showed that after the activation, there was a 7.1% increase in the daily miner revenue in US dollars. In addition, it has maintained touching its two-month highs.

One of the factors contributing to miners seeing an increase in their revenue rate is the bullish price breakout for ETH. This has been the case a day before the London activation, with Anand Gomes, one of the founders of Paradigm, a crypto trading platform, saying that this development can be attributed to the latest changes that were implemented in EIP-1559.

As it turned out, miners are recouping lost gains from higher ETH prices and increased activity on the network.

In addition to surging price growth for Ethereum, users have also seen an increase in the number of NFT transfers by analyzing on-chain transactions. There has been 75% growth in these NFT transfers which have contributed to a boost in both ETH prices and miner income.

The CovidPunks series is an example of a recent NFT release. It was issued on the same day as the activation of the Ethereum London Hard Fork and was quickly sold out in just a matter of minutes. CovidPunks have achieved over $1.24 million in its total sales volume in the last seven days.

Other users experienced cases of unsuccessful transactions due to insufficient transaction fees. In relation to this, there have been noticeable gas spikes recorded when new NFT’s launch and buyers race to ming them. Jumping from less than 100 gwei to more than 400 gwei in some cases.

If you have read further about the London upgrade, you have probably been informed that despite some responsibilities being transferred to validators and the potential lower revenue, miners can still rely on the blockchain’s optional tip or the “priority fee”. With this, they can be rewarded for their role in including transactions into a block. The idea is that users can make miners skip the queue for transactions by adding an incentive in the form of a tip. Anyone can do this if they want to get in front of the queue by offering more ETH in their transaction fee.

Days after the activation, around 22.4 million dollars worth or 7,141 ETH were collected in priority fees that were paid by users. Miners are starting to see additional increases in their total income. This will result from a surge in on-chain activity driven by an NFT drop or a popular decentralized finance (DeFi) application that will drive the continuous increase in priority fees awarded to them.

Users Adoption of the London Upgrade

It was revealed on Friday that a large number of transactions are not EIP 1559-formatted. This indicates that no minimum base fee or priority fee is specified by users. When these instances occur, the fee that was given to transactions on the blockchain will be automatically split into two. One is for the cost of the base fee and the other for the miners’ income in the form of the priority fee.

Now, what are the other changes that users and network providers can benefit from in the new upgrade aside from the other intended goals? In EIP-1559, should there be a case where the given transaction fee paid by the user is not used for the base fee, or the money specified for the priority fee, it will be returned to the sender’s account.

Transactions that are formatted based on the EIP-1559 are cheaper for users in general compared with those that are not formatted the same. However, crypto experts have seen indications of wariness from users and business in adopting the new update. Many believe that the majority are waiting for the London update to fully stabilize and show its intended benefits and effectiveness.

In summary, the initial fears of lower revenue for miners did not result in any cause for concern, so far. With the surge of price activity and NFTs transactions, miners may continue to see their incomes boosted by the priority fees. Plus, the blockchain still rewards them with a portion of its transaction fees.