Curious about the price of bitcoin in your national currency? Simply input the amount of bitcoin you want to convert, select your currency, and get the result! Bitcoin prices are taken from the Beaxy exchange marketplace.

In the last 24 hours, BTC/USD reached a peak of $0.00 and bottomed out at $0.00. The beaxy daily volume is BTC. You can track the historical price data for  BTC pairs by viewing the chart.

Connect your bank account to Beaxy to enable BTC to FIAT pair trading and direct ACH and Wire transfers for BTC purchases. Onboard and offboard multiple national currencies simply and easily with this process. Additionally, we offer credit and debit card purchases so you can access crypto markets whenever you need to.

Our revolutionary swipe-based trading system uses third party AI to auto-generate trading signals for you. This reduces the barrier to entry to trading by eliminating the many dozens of hours of study and research required to understand trading mechanics. While we still recommend doing this research, you can use Trender in the Beaxy mobile app to get quick and easy bitcoin signal suggestions, and signals for a variety of other cryptocurrencies. Swipe left to pass and swipe right to take the trade.

Beaxy offers both in house and Tradingview charting tools with all the indicators you need to chart assets and place trades easily and effectively. Combined with our user-focused design, charting and trading bitcoin on Beaxy are seamlessly integrated to make your experience as smooth as possible.

At Beaxy we offer not only REST API but also FIX API, putting us in a category few exchanges inhabit. FIX API allows up to a million messages a second to be communicated, giving algorithmic traders an advantage. Check our API documentation to get connected and contact the team if you’re looking to learn more about how to get started trading algorithmically on Beaxy! 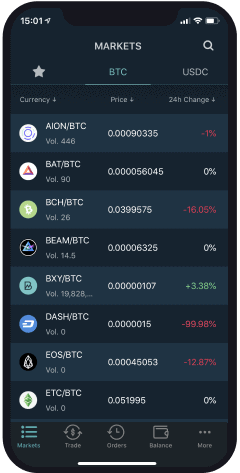 Calculate the Price of Bitcoin On the Go

Order books contain orders to buy or sell an asset that are determined by exchange users. Orders are matched by the exchange matching engine to produce completed traders.

The Recent Trades section is displayed beneath the order book on the right side of the Trading Page. It lists all recently completed trades on the current trading pair in chronological order.

Cryptocurrency Pairs Pick the cryptocurrency pair you wish to trade on. If you are using USD or other FIAT currency to trade you can onboard your money into a new asset through a bid order. If you already have the asset you wish to trade you can either place a bid order for more of that asset, or an ask order to sell some of that asset. Thus, picking your crypto trading pair is the first step to trading.

How to convert BTC to USDC

Beaxy allows you to trade bitcoin with convenience and peace of mind. Our user interface is customizable and can be optimized for beginners and experts alike. Reduce your risk by storing bitcoin in our custodied wallets.

Beaxy provides advanced charting tools, a revolutionary swipe trading app, world-class FIX and REST API, and FIAT onboarding and offboarding to make for the best possible Bitcoin trading experience. Trade bitcoin in the most sophisticated and simple ways on Beaxy.

Want to know the price of bitcoin in your national currency? Enter the amount of bitcoin you want to convert, select your currency, and see for yourself! Bitcoin prices are taken from the Beaxy exchange marketplace. Beaxy exchange market prices are sourced from global markets to give you the most accurate rate. Check the price in your currency now and place a buy in your preferred currency!

Bitcoin is the first and most popular cryptocurrency originally proposed in 2008 and subsequently created in 2009 by the pseudonymous Satoshi Nakamoto. A native asset of the Bitcoin blockchain, it is the world’s first currency that is inherently free from the control of central banks. By design, the underlying network is censorship-resistant, permissionless and peer-to-peer with a scarce and programmable native currency (BTC). Bitcoin remains the global cryptocurrency market leader by price and total market value.

Satoshi Nakamoto mined the first Bitcoin block, known as the genesis block, on January 3rd, 2009. Nine days later, the first transaction with bitcoin was completed when Satoshi Nakamoto sent bitcoin to Hal Finney, the creator of the world’s first RPoW (reusable proof-of-work system). The first known instance of bitcoin being used to pay for a good or service happened more than a year later on May 22nd, 2010 when Laszlo Hanyecz paid 10,000 BTC (worth approximately $41 at the time) for two large pizzas. Ten months after the famous pizza transaction, bitcoin’s usage as a medium of exchange began to skyrocket as it was adopted by dark web users who wished to shield their identity while making purchases on the dark web. After gaining popularity on the dark web, it took six years for bitcoin to eventually reach mainstream popularity when its price surged to $20,000 per coin in December of 2017. Today, it is estimated that roughly 1% of the world’s population either owns or has previously owned bitcoin.

The Bitcoin network consists of nodes that can validate transactions, organize them into blocks, and solve the hashing function to mine a block and receive the block reward. All other nodes on the network will check the work of the miner that mined the block to ensure that it was legitimate. On the Bitcoin blockchain, each block is 1 mb in size and holds an average of 3,500 transactions per block. Each of these blocks are mined every ten minutes. To make sure that block mining times are consistent, the Bitcoin protocol has difficulty adjustments. This makes mining a block easier or harder based on the time it is currently taking. If blocks are being mined to quickly, the hashing equation becomes more difficult to solve. If blocks are being mined to slowly, the hashing equation will become easier to solve. The difficulty is defined as the number of zeros that must appear at the beginning of the resulting hash. More difficult solutions have more zeros at the beginning. This implies that the odds of finding a result with more zeros requires more hashes. There are approximately 18.5 million bitcoin that have been mined and can be included in the circulating supply. The remaining 2.5 million BTC will be mined from now until the year 2140. The block reward paid to miners will be cut in half every four years until there are on bitcoin left. This will happen roughly 120 years from now. The Bitcoin protocol completed its third halving on May 11th, 2020. At that time, the block reward given to miners was reduced from 12.5 BTC per block to 6.25 BTC per block.

How to exchange other Currencies on Beaxy